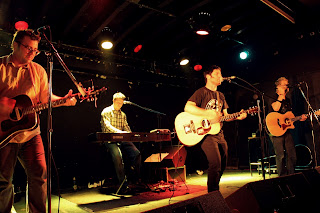 As you can see by photo quality above - we're in another league altogether today.

I confess: I do not remember when was the last time I forgot my mobile (which is my most loved possession, also being my camera, computer, internet window and reminder) at home when leaving for anywhere, much less concert night, but this time I was in luck because my lovely friend E saved me with some really good photos. Also, this streak of relaxation and absence of neurotic need for control was kind of landmark for the evening - a kind of laissez faire flag - that was planted in this evening like it would be in a seized mountain peak.

I liked the gig.

It was a peculiar, unconstricted performance, oddly reminiscent of less fervent times. There was good music, there was friendship, there was cheap liquor, there was most beautiful well groomed redhead in the audience.

Arrangements were different. My friend said: "This is so funny. People used to hear this songs played as punk/rock songs and what they got was singing around a campfire." but it was a beautiful campfire singalong! I liked how they moved around a lot, went backstage and back onstage again, how they were all different - and scorpios! to add - but they shined agreeableness, friendship and pure joy of performing for us. They played a bit each and they talked and were funny and nice. I liked Snodgrasses' parts the most (he has beautiful, beautiful voice that sends shivers down my musical spine) but it was all very inspiring and I felt motivated to research and to listen to more of their music.


In addition, all this was instrumental for me to make myself proud of myself again.

But this gig helped me re-attach my broken old self.

And I also met someone I admire.
Posted by DerzaFanistori at 3:01 PM