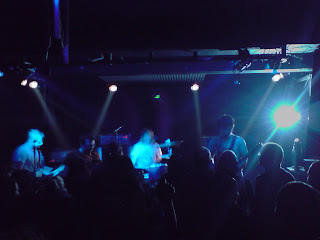 Some two months ago, exactly when I concluded that I'm too old for this shit, my internet friend sent me last.fm invite for Autistic Youth and Defect Defect gig at Attack! and I immediately included it into consideration as a helpful tool in my crusade against my evil ways.


Last night it proved to be wise and well recommended choice.


This gig was a real adventure for me; this is my first time to watch anyone in Attack! and on top of that my interest was very much fueled with Pavlov's recent article with some inconspicuous details about trouble in squatter-y free-culture haven. So I came early and poked my psycho-socially interested nose into all nooks and crannies, wore awkward wide-eyed grin and asked funny questions. I managed to nearly insult few of the natives but I was - all in all - very happy with things seen; there are many honest, endearing and good people there - people troubled with us-and-them, people generaly kind albeit naive. People who will grow up to be kind and honorous - and I liked that.

The gig itself was funny and great, but let me stray a bit more from instant immersion.

There was another punk performance a month ago and it held a prophetic story: on Rikk Agnew gig at KSET while Black Gust were playing one guitar wire pinged into non-existence and that caused a bit of a commotion and a funny verbal altercation between band members which ended with the singer slaping one on the bewildered guitarist saying: "Why the fuck do you need to change wires - are we a punk band or not?!" (while grandpa Rikk was snickering his ass off). Last night, while Black Gust were happily prancing in the front rows, guitare wires were breaking right and left - I never seen a gig so beset with technical difficulties. Both Defect Defect and Autistic Youth had trouble with wires, sound adjustment, microphonic squealing.

But they managed to overcome it all.

It was a gig blotched with technical oddments but energetic and fun neverthelles. Defect Defect were valiant in their effort to overcome adversity - so valiant that there were moments I genuinely felt moved with their candor and forgave them everything instantly. Autistic Youth were a little less troubled with technics and their sound is quite a bit more "professional" and evolved and I loved their set to bits. They played and exchanged places and have shown they thave skills and then some and they were as good showmen as they were musicians. I danced and jumped and hopped and shook my head and squirmed like an epileptic eel and I enjoyed it immensly. I was filled up with energy and enthralled with joie de vivre and high on serotonin from all that activity.

And after it ended I scuttled away through hoarfrost covered streets and into my car and I was home 14 minutes later as all the traffic lights were green on my 11 km drive.
Posted by DerzaFanistori at 8:01 AM