A House Is Not A Home 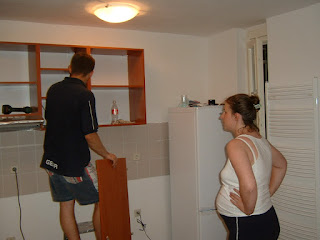 This is second post in the series "What is home?". Read posts one and three here.

When I was furnishing my last apartment I was pregnant with my daughter and I was making a home for the man I loved and for me and for our child who will soon join us.

My brother's in-laws were selling their flat and we decided to buy it. As I was finishing college and didn't have permanent employment I was not eligible for credit so we decided it would be easiest for us that he takes care of contracts and credits for the place we'll all going to pay for and live in thereafter. I had many medical problems during pregnancy and had to stay in hospital for some time but I was so happy and so invested in making that flat a home no task was too big for me. I mobilized relatives and friends to check the place and make necessary reconstructions. Flat was stripped down to bare walls - everything was checked and changed; water installations, ceramic tiles, flooring, woodwork, heating elements, walls were torn down or moved. My parents lent us money and everyone pitched in with free work - as my family are all builders and contractors. I chose and bought tiles and parquets, sands and colors, nails and radiators.

After the apartment was completely renovated I met up with our carpenter and sketched for him the ideas for furniture; joint workstations, kitchen cabinets, bookcases, raised dining room table and lighting console for dining area with shelves - our space was to be epitome of functionality. I searched furniture shops for best deals on furniture I liked. I plotted car routes so it would be most cost efficient to visit them. I walked and worked and walked more until I had to be hospitalized once more for 14 days and when I left hospital I finished our nest and enjoyed it for two months before the baby arrived.

My home of cherry tree and light blue was lovely and immensely functional. It was beautiful to sit in it, to clean it, to cook in it, to entertain in it.

For two months until the baby came.

Growing responsibilities that I excepted with open heart were far from welcome to my then-husband.

For short time he tried to evade, evasion grew to resentment, resentment to malice and malice was drowned in alcohol and spite.

There was me, at first denying, standing up for him in front of others, defending him while trying to be understanding - "It really is a big change, he's just overwhelmed. Everything is OK."

And he could, but he did not want to. It was too much work. I know that because I tried to bargain function out of him. I offered things beyond his power to turn them down - and it would work for a few days and subsequently tumble down to newer lows.


... and I grew tired of lying, of being alone, of working odd jobs to pay for our food and electricity and water and his bar bills, tired of calling his cell in the middle of night to check if he is coming home, tired of laying in bed listening to elevator rising to our floor - holding breath hoping that it's not the Police coming to tell me he killed someone after sitting behind the wheel drunk.

I cried a river.

...and when I would put her to bed I would stand on the terrace, in darkness, and smoke and cry. Until the tears dried out.


My home of cherry tree and light blue. Lovely and immensely functional.

One night after spending few days on a binge he came home and started to yell. My daughter and I were already in bed and he screamed hoping I would retaliate. He got the phone and called the police and asked them to come and kick us out.

I refused to get up and hugged my girl. I told him we'll leave in the morning.

With first light I called my dad and my brother and asked them to come get us. I grabbed some personal things and clothes and put them in two trash bags under constant barrage of insults. His mother came and begged him to calm down, begged me to reconsider, so small in her powerlessness.

My daughter, then 3,5 years old, would later reflect on that time with: "You remember that time when we still lived in the apartment, when dad was yelling and you were crying and I hid in the closet?"

Later on he admitted he never called the Police, he only acted as if he did to freak me out. But it was too late for freaking out, too late for pleads and too late for tears.

He kept my things, my books, my clothes and my shoes and he refused to give them to me until divorce procedure was over and decree absolute reached - three years later. I had to hire a lawyer just to get my stuff because he was not letting go. I had to list all of the things I consider mine and lawyer told me: "Write only the things you want the most and think carefully before you close the list because you will not get anything you forgot to list."


When I came to apartment to get my stuff (from pre-approved list only) he was already living with another person, yet the apartment was the same as when I left it three years ago. My desk was undisturbed just like I just got up and went to fetch some coffee. All my books were where I left them and my shoes stood in the hallway just like I'm about to put them on. My wardrobe held my clothes and my drawer my stuff. Kitchen cabinets housed my knickknacks in the exact same places and I could get my things with my eyes closed if I wanted.

It was still beautiful (if unkempt) cherry tree and light blue house, lovely and immensely functional. It was so well planned and comfortable it didn't need changing, even though it was somebody else's house now.

But it wasn't home.

It wasn't my home for a long, long time. But it wasn't anybody else's home either - if it was they would live in it and leave personal marks on it.

It was still my house. It wouldn't be more MY HOUSE if I pissed on corners to mark my territory.

But it WAS NOT MY HOME.
Posted by derzafanistori at 8:20 PM

Email ThisBlogThis!Share to TwitterShare to FacebookShare to Pinterest
Labels: experience, family, home, what is home