Almost two months ago, on May 11th I went to theater EXIT with a friend to see Kreket, a play based on The Frog Prince by David Mamet and I have been thinking about how to speak about this experience ever since.

It is so weird now that taking pictures with one’s mobile has become the norm, to come to the place where there is explicitly said: “Picture taking forbidden” as it is in Exit entrance.

So I submit this ticket photo as proof: 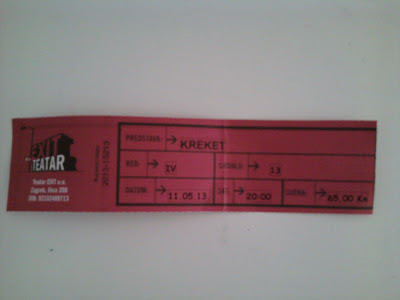 We met a bit early so I had a chance to nose around and to observe the “audience to be”. At one moment the doors to the stage opened and we flowed like the flood to our seats. Soon, everything started.

This play, The Frog Prince, is not widely accessible. Croatian libraries don’t seem to have copies of original and it seems the play itself was never translated as a book. I did not read it before I went to see it and I still did not manage to get a copy - but I would like to read it, so if you have a copy you could part with please drop me an e-mail.

So, how was the play? Acting? Scene? Music? Experience?

It was wonderful and terrible in one great undividable mesh.

Acting was wonderful: Luka Dragić, Mia Anočić-Valentić, IvanGrčić, Bebe Na Vole - they were all great. I loved how they were expressive and how their acting and playing was beautifully effortless - treacherous and sweet - surely showing endless hours of preparation so everything could look this smooth (congrats to Rene Medvešek, the director). Bebe na Vole, being the music part of this arrangement, was excellent and his music and storytelling both shined and were irreplaceable in progressing the story. Scene was absolutely brilliant and I am at a loss for words how great Tanja Lacko did the scene and Milena Medvešek chose the costumes. I am truly impressed and humbled with ingenuity and clear-cut simplicity that gave wings to the story.

I spent almost half of the play soundlessly sobbing in fourth row, with tears streaming down my face.

Well, there were many reasons and I think I’ll spell out a few.

First, the ingenuity of the stage is unbelievable and it becomes apparent in first few moments of the show.

Second, cast is magnificent and I’m always completely disarmed by what wonderful artists exist this close, so close that it is hard to believe that this people take off their costumes and walk among us every day, going grocery shopping or paying parking tickets, and still act with such force and believability they resemble more Gods than mortals.

And third, I was so shaken with reception by A LOT of the audience it saddened me down to the bone. You see, this is a multilayered story with multiple layers of both meaning and showcasing this meaning. Actors talk, but they do not only talk. They move, they change costumes, they non-verbally suggest and use lot of facial expressions to point out the discrepancy between what is said and the meaning implied. It is so wonderfully multilayered that you can rarely see something so elaborate and so well thought over. But it really felt, there in the darkness of the theater, that I’m surrounded by so many fools that are completely missing the entire story that this saddened me immensely. Every time they laughed at inappropriate place (scene) it just broke my heart. It was so Margaritas ante porcos that it physically hurt.

Disappointment by diagnostics - the harder they laugh, farther from meaning (stupider, really) they are.