There are stories that just won’t conform to not being retold.

There are stories that somehow find a way to shine right out of your eyes onto the world that consequently grows hungry and adamant to listen, to make talk.

I have already retold this story, the story of how it was to see Mika Male promote their new album “Tamo gdje se sastaju luđaci” (“In a place where madmen meet”), 28 times from Saturday night to few moments ago here at work. The first time that I TOLD this story, before re-telling it, the story was one sentence long. It went:

This was,
by far,
the most beautiful auditory experience I have ever had.


Of course, there were many other parts of the experience beside auditory but as far as auditory experiences go, and the plethora of components that they may utilize, this was brilliant.

Before coming to MMC I met a friend for a drink and some catching up and we were eager to see the show and we entered MMC right before the appointed time. The band was there, and some audience and the stage, set so beautiful and warm like the sweetest promise that’s been made. 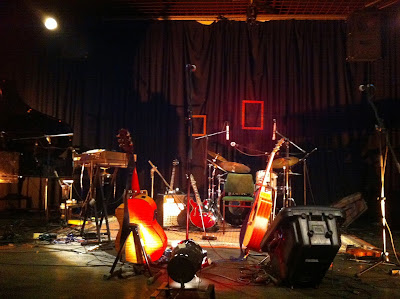 We mingled a bit.

There were some welcome drinks and a small table with merch and the band was still preparing for the show. Some ate foil-bundled sandwiches and some hid in the powder room. All were wide-eyed and visibly excited, so beautifully human in their nervousness. At one moment someone asked Orlan when are they going to start and he said, absentmindedly and bewildered, as if talking about some exotic ritual: ”I think the girls are putting on makeup” and we exchanged glances and smiled as he wandered off.

I chose to sit in front, close to the stage. Christmas lights wrapped around coat hangers and  handrails glowed.

Tomislav Zorić from Olovni ples a.k.a. Nevjerni Tomo (Doubting Thomas) opened with a few words about the occasion and few beautiful songs among which was my personal favorite Noćas je moja duša. 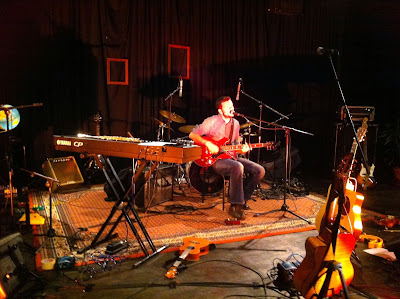 You can hear that song, as well as many others here, on his bandcamp page. Try as I might I cannot explain wonderful, velvety timbre and fullness of musical picture while Tomo played; it’s hard to believe that there’s just one guy with a guitar and a voice as it sounds so complete and well balanced. He also spoke a bit in between songs and he told us most of the songs he’ll play for us are his compositions around Đuro Sudeta's poems and that one (Siva) is an original work of his bandmate from Olovni Ples. That bandmate is Stipe Periša who was also in the audience, and Tomo tried to call him to stage but Periša held firmly his ground even though we clapped and cheered him on. We could almost see Stipe blush in the semidark of the third row.

After a tiniest bit of rearranging Mika Male started to play.

The girls were absolutely beautiful, with makeup and all. 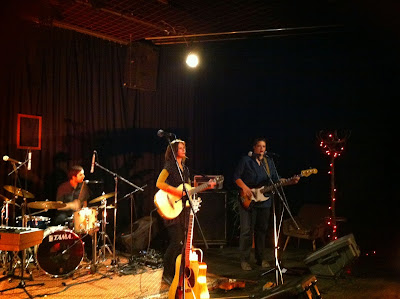 When the performance is extraordinarily great my mind grows blank and even though I am completely present in the moment and I know all the lyrics and I silently mouth them and I move and dance, even sitting down, I cannot remember nor repeat the set list. I know that there was Sve je novo somewhere in the beginning as Orlan said that before the song started. 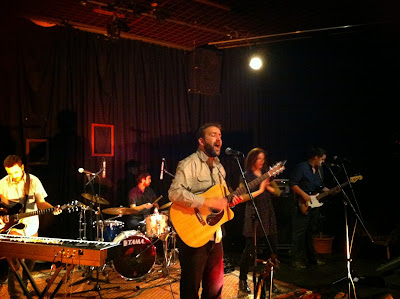 I know they said at one point that they’re playing whole new album by track listing, and that I glanced the listing at one time and said: “My favorite is next” (before Već smo bili ovdje). I heard my friend Zvonka, sitting next to me, say: “Sound rehearsal must have taken 100 years” at one point and by that I was made aware that there is insane quantity of instruments on stage, including a small glockenspiel. 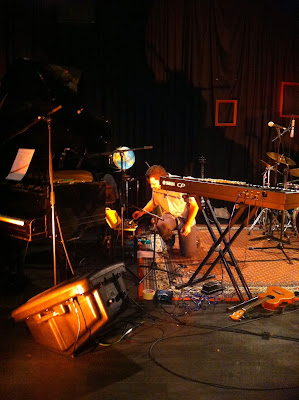 In Močvara, as I entered, a friend was waving to me just as the band was starting to play and he asked: "How was it?"
And I said:

This was,
by far,
the most beautiful auditory experience I have ever had.

Posted by derzafanistori at 4:34 PM