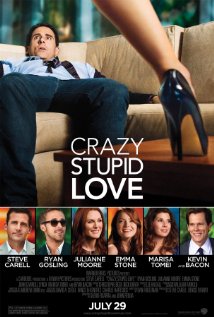 Two days ago I watched "Crazy, Stupid, Love" (2011.) and as I am still thinking about it I've decided to write a few words on the topic.

I think this is well made, actually pretty good movie.

How can this be?

There is an lasting anecdote saying Alfred Hitchcock was once asked about nature of movies and that he replyed that "A lot of movies are about life, but mine are slices of cake" - and surely, so they were.

This movie definitely isn't slice of cake. It neither amuses us (being awkwardly paced) nor educates us (having nothing to say), it does not impress us (as we've already seen it all if we ever looked around us) nor it seduces us with beauty (we've all seen better) so this movie is a slice of life.

And in life - cast is brilliant!

Steve Carell, Julianne Moore, Ryan Gosling, Emma Stone, Marisa Tomei, Analeigh Tipton, Jonah Bobo, Kevin Bacon... it is a godawful mixture of unpairable puzzle pieces - which comes over weirder still as they have all been made parts of romantic relationships. But it is not weird. Life is not a Hollywood movie and in all sincerity this IS how living people pair up. Society IS a canopy of mediocrity not frequently interrupted with intelligence and/or beauty.

And then - there's a thing with the title "Crazy, Stupid, love" and the way it beautifully sums it up:

CRAZY - for which other adjective could you slap onto man's longterm best friend who leaves him in his hour of need with the words:"My wife said we have to choose between you and Emily and I cannot see you anymore." or the fact that same man still comes to prune "his" roses and groom "his" lawn after being divorcely evicted.

STUPID as there is nothing better to be said about a man who thinks he and his wife stopped being "us" after she slept with a coworker and not after a millenia of quiet despair in invisibility and routine.

LOVE as there is nothing to give our life meaning IF WE DON'T. Stories that steer our lives are not facts but interpretations - our thoughts and feelings that we use to explain, to predict, to understand. Soulmate? One and only? Destiny? Hell yeah! It surely sounds better than:" I squandered my life on mediocre twat because I lacked guts in the beginning and later I was to lazy to change anything." So there is love. There has to be love. Because interpretations are our facts. And if love is what motivates us - sky is the limit!

I especially liked the ironic addition of Jacob Palmer (Ryan Gosling) - obviously intelligent, beautiful, hardworking and accomplished character with seemingly moral significance. And if you watch carefully this pretty picture educates no moral whatsoever. There is no fallacy in his womanizing nor is he reprieved by discovery of love. He is the only intelligent, purposeful subject of this entire story even being only an object.
Posted by derzafanistori at 1:45 PM

It's funny, but I felt exactly the same after watching the film. I didn't like it, but I didn't think it was a bad movie. My sister, on the other hand, totally loved it and has been back to see it again. Funny how people see things differently.

It adds to the impression that it is a good movie. Something for everyone :o)