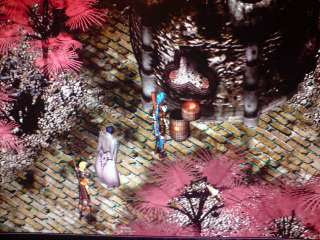 As probably very few of you will recognize, the landscape in the photo is cg landscape from Septerra Core: Legacy of The Creator game. I am playing it now with my offspringess and we're contemplating concepts of religion, military, class and distance. It seems she likes it and so do I, showing her places and introducing her to people just like I would in the'real world'. It could be argued that people are a bit one-dimensional compared to real counterparts but actually it stands true quite a bit less that one would imagine. Yes, we all have an opportunity to look and regard our neighbors and friends from many perspectives but the truth is we usually don't. People stay just as one-dimensional to us in the real world as they are in games. Additionally, most screenwriters do add obvious notes about character motives and emotions into games, and that... that is the fact we're most commonly disregarding and are failing to acknowledge in life characters.
Posted by DerzaFanistori at 1:23 PM