Franz Nicolay, Morning Glory and Me As Well @Attack! 28Mar2013

After a bit of concert-going silence that I spent growling in discontent and could not be bothered to leave my habitat Yesterday came bearing gift of interesting listening prospects at Attack! so I made truce with The World and went to The Gig.

It was freaking cold but I craved for a beer after my evening 2,5 km run so I welcomed a beverage and took heed of first act for the night: Me As Well... 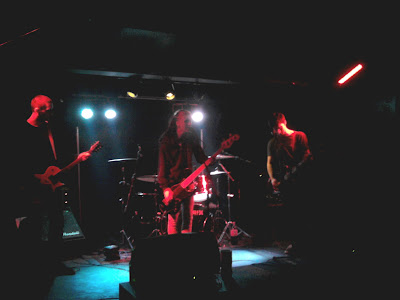 ... A band from Karlovac with 3 guys and a girl on bass who also shares vocalist duties with first guitar. They were sadly terrible, but the kind that can be forgiven. They seemed overwhelmed, underpracticed and sorely young. Every so often vocals would just "have to much on their mind" to stay within the rythm while singing and could not keep up. First guitarist continued to nag audience with less than humorous remarks and although the crowd was friendly it felt forced even to clap. They also are not HC Punk, as the announcement made us believe but more of melodic/light punkrock with heavymetal tendencies. In more metal-sounding songs they were much more synched than in punky ones because there was no singing/playing overlap so those were noticably better performed. I'd like to hear them again after they had more practice and maybe on a bit smaller system because the loudness ate whatever good was left.

Light was terrible and all my photos are too dark, but Franz Nicolay was magnificent! 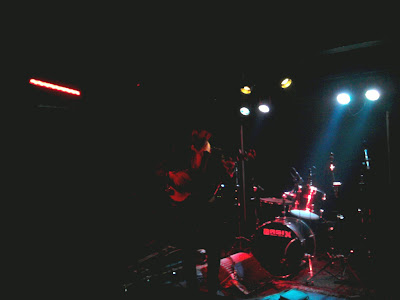 If you like his music at all this incarnation was most perfect of miracles and if you don't care much for his music he was so great a performer, comedian, magician, star and co-sufferer in this rediculous walley of tears and laughter that it was a pleasure and privilege to be there with him.

He told stories. Introduced himself. Opened with The Hearts of Boston. He talked and told more stories in between songs. He played pretty much whole Do The Struggle album, some Bad Advice and more. And more. Somewhere in there he told story of expectations:

"I play all around the world and go to many places that are far away from home. Going to that far away places I always think that nobody will know my songs and nobody will come. Last week I played in Russia and before I played in a club there I thought that nobody will come. And there will be just me and the bartender. And halfway during my set bartender will go outside to have a smoke and there would be only me. With my songs:

But you know what? People came. People always come. And, there is one great thing with having low expectations:

You can always be pleasantly surprised when your low expectations are met and exceeded. And that brings happiness."

I laughed and I cried and I danced and it was magnifficent.

And at one other moment he played I Had A Good Time Tonight and as he started singing the chorus:

"I had a good time tonight
But it would’ve been better if I could’ve danced with my wife."

... and his wedding ring glistened in the semidarkness and the song felt so real and full of longing and there, in front of me, in front of us all stood a person, not just performer but the whole nine yards.

And when he played Did Your Broken Heart Make You Who You Are? I could truly say:

Go see his homepage and buy some of his stuff.

Last ones up were Morning Glory. 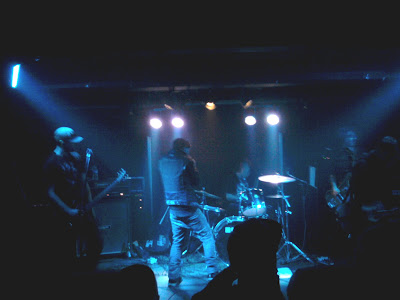 They were talkative, friendly and funny ("We had to cross Yugoslavian border and it was terrible. Only other border I can think of that is so terrible is probably Canadian border.") and they played as seasoned professionals; confidently, effortlessly, vibrant and joyfull... but I was already very tired and my feet were frozen and my eyes stung from the smoke in the den so I went home carrying that elating ska rythm in my ears.

Posted by derzafanistori at 11:40 AM