Elephant and The Moon @Rockmark 28May2013

In about a year since I've moved with my daughter to our own place I was bestowed by a sense of peace of mind and mental fortitude to suddenly enjoy life instead of just enduring it and there has been a monumental change in perceived multitude of daily options. Suddenly, it became apparent that the world is a veritable cornucopia of experiences and I chose to peruse  much of its musical section. In this exhilarating overabundance I sometimes lose track of stuff happening right in front of me.

I've met Petar some months ago, during one indie event at which we gave our love and support to Felon, Marshmallow and Lolita and we mingled in the same crowd. Since so many things were happening with the scene, things that would subsequently bring to the release of Bistro na rubu šume Vol1 (free download here) somehow I just neglected to make connections at that time. Time went by and gigs were attended and we met on quite a few of them but it always just stayed on nod of recognition and a bit of chitchat level until last week when we listened to Eddie Would Go featured during Žur at Spunk and in the pause Petar talked to my good friend about tour plans. I smiled and nodded and soaked in information and when he went away I asked her:

And then the clouds in my head parted and sun shone on the heart of the information. Two short days later I went to see him play live in Rockmark music bookstore.

I just love this indie crowd and organic tranquility bubble they produce wherever they reside. 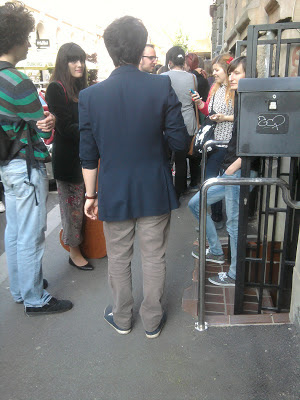 As it was to start at 7 pm I could also bring my daughter along so she can see and hear and learn and enjoy. I love that there are more happenings like that every day in Zagreb and that they give an opportunity to show our kids both proper etiquette for social events and serve as a demonstration window how to be an artist with both pride for his craft and appropriate dose of humility to make the art and not the person center of attention. It was heaven-sent that Petar was the person to show this to my offspringess as he is true embodiment of both mentioned artist traits.

And then the magic started.

I've listened to Elephant and the Moon records earlier (and so can you if you download them here, free of charge) and they are nice and promising, lest technically not very good - but being here and listening to the same songs (and many more new ones) was incomparably awesome. I love how his voice completely changes from his youthful, casual speaking voice into a masculine and determined voice of storyteller when he sings. 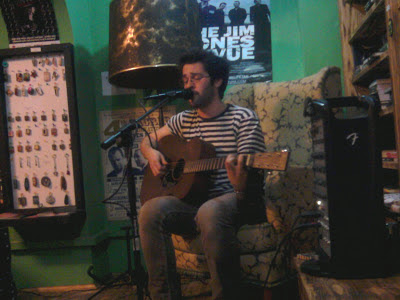 It is a small and private space in Rockmark and the acoustic properties are wonderful. Crowd was attentive and beautifully quiet and it was pure pleasure to be there to tap into that beauty. There were a few musicians in the audience and some of them quietly sung backup vocals (I'm sure for Dunja Ercegović and I think also Ivana Lulić) and it was so touching and cute and the implication of them knowing colleague's songs by heart was just something that fills my heart with hope and pride to know these people and live in a society that contains them.

Elephant and the Moon also did some talking for us and he was so nice and funny and spontaneous it was great to be there... 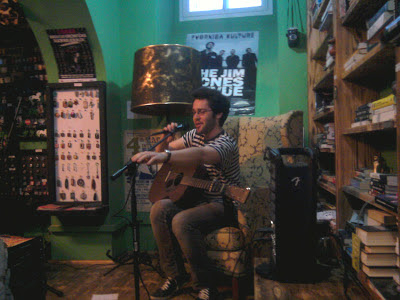 ... and the 10 songs he sung for us flowed by so quickly. I was glad I took notes because now I will not forget that my absolute favorite was "Driver Please" so I could keep and eye on its hopefully quick release. 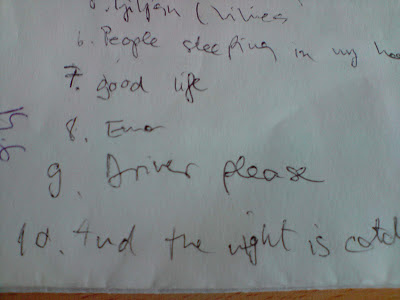 As a singer and performer Elephant and the Moon is already persuasive and excellent but I feel that his stellar quality is that of a lyricist. His songs are already so vivid and his mental pictures so well chosen I feel age will further sharpen this ability, to act like a sword for cutting down and clearing the ambiguities of life.

The force is strong in this one. We'll see where it will take him.
Posted by derzafanistori at 12:05 PM