Začarana Močvara (Enchanted Swamp) is low-key project of Močvara club and it hosts world music or indie  bands with artsy proclivity. Friday night we had an oportunity to see three bands - number that I usually consider too big for a live show but it turns out the program was well pieced together. 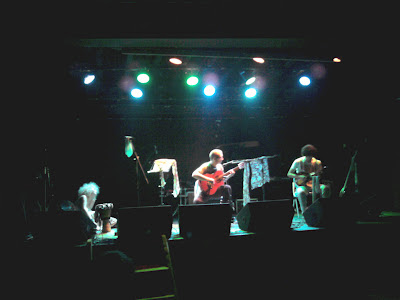 First ones on were Amarchord, if I understand correctly promo materials for the evening, project that only got together after they were invited to perform at this show. Their singer is magnifficent rubenesque creature of unearthly, etheric beauty and even greater voice and for the next show I'd put spotlight more on her than current  band lead. I hope he was just very very nervous and that he really is not a person that always divulges point of a joke before telling the joke itself. Musically they werent bad but I think they should strive for a bit more coherent act.

Second act was a surprise to me and I was so taken with auditory affluence of their voices I got goose bumps all over. 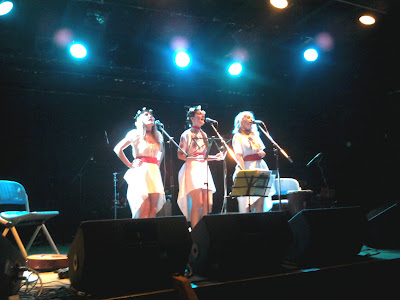 Trio Vuge are singing fairies, part of Etno Udruge Vuge (Ethno Association Vuge) and they sing, sometimes accompanied by old instruments music, bunch of beautiful traditional songs from Croatia, Macedonia, Kosovo, Romania,... They were dressed up and adorned by flower garlands and they sang wonderfully. I did not understand half of what they were singing about but I immensely enjoyed their playful voices - cornucopia of sound - spilling over audience, makin' us forget all except the music. Fairies, I tell you! Wonderful stuff!

And then there were Meszecsinka - stars of the evening... 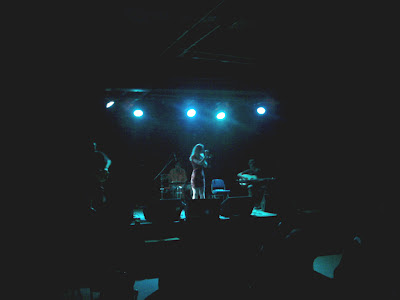 ... band from Hungary consisting of three middleaged guys and very sensual girl singer. They played bunch of Balcan-sounding ethno songs and many Spanish ones. You can sample their work on their bandcamp (link above) or soundcloud pages - they do not offer same selection of songs. They played fine and had good connection with people but what I liked the most in their act (beside Annamaria's wonderfuly skittish voice) is their body language: very relaxed, joyful, at ease and notably gender-defined. Annamaria is so abundantly feminine and guys so masculine and protective that it oozes from ther act and makes this one extra-special crossover experience. It's a bit sad they are visiting here in the height of summer, when it is too moist and too hot for meaningful loving because this would make glorious first date, one after which everyone would most certanly get lucky.

I love how live music experiences never are just music.


Posted by derzafanistori at 7:31 PM